Từ khi chủ chết vào năm 2006 , tối nào con chó này cũng chạy từ nhà ra nghĩa trang cách đó 3 dặm để giữ mộ chủ . Buổi sáng nó chạy về nhà chủ .
"For the past 6 years, a dog named Capitán has slept on the grave of his owner every night. His owner, Miguel Guzmán died in 2006 and Capitán disappeared shortly after the family attended the funeral services. They searched everywhere and put out flyers to try and find him. But no one had seen him.
A week later, some people who were at the cemetery late one evening spotted Capitán laying on a grave and they contacted the grounds keeper at the cemetery. The cemetery notified the family who promptly came to pick him up and take him home. But each night he would cry and scratch frantically at the door to go out and he wouldn't return home until morning. It was later discovered that Capitán would walk the 3 miles back to the cemetary each night to guard his master's grave.
It has been nearly 7 years now. The cemetery does not close the gates until he arrives each night promptly at 6 pm. He sleeps there all night guarding the grave until the grounds keeper opens the gate in the morning". This is a true picture of Capitan here http://instagram.com/p/oAJsgmxban/ 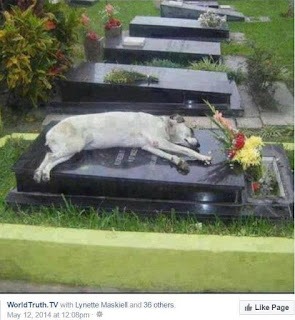 Posted by thebimini at 9:43 AM