Hundreds of black-clad demonstrators took to the streets of Hong Kong again on Saturday to protest against the anti-mask law, and even as the rallies remain largely peaceful, petrol bombs were thrown at metro stations, while some shops were vandalised.
Protesters also gathered in Prince Edward and Wan Chai to call for an end to alleged police brutality, hours after Cardinal John Tong Hon, the head of Hong Kong’s Catholic community, made an appeal for peace on a radio programme and said law enforcement officers needed to perform their duties with their conscience.
“They also need to abide with the law, so that the people’s trust and respect in them can be rebuilt,” he said.
ADVERTISING
inRead invented by Teads
Tong added that while it was natural for people to be disappointed when their demands were not met, hatred would only give rise to violence, which only turned problems into more hurt.
The protest came as US President Donald Trump said the trade deal he struck with China on Friday was “very positive” for Hong Kong and claimed the city’s anti-government protests had de-escalated significantly, leaving some demonstrators disappointed he did not push for their cause.
Shortly before Friday midnight, Hong Kong’s embattled leader Carrie Lam Cheng Yuet-ngor wrote on her Facebook page that she hoped she could enter the Legislative Council building on Wednesday to deliver her policy address.
Don't Miss Critical Events In Hong Kong
Get our newsletter sent Monday to Friday
By registering, you agree to our T&C and Privacy Policy 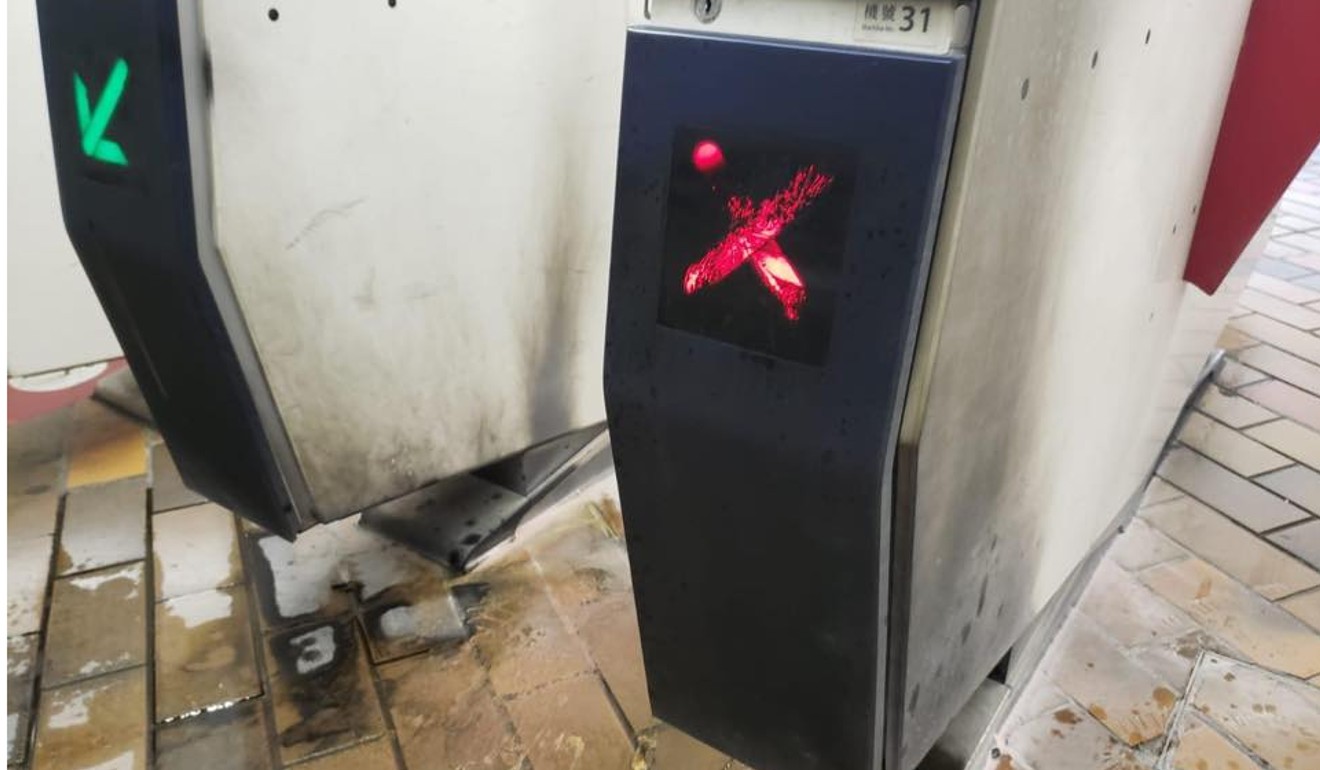 Turnstiles at the MTR station were damaged. Photo: Facebook/Hong Kong Police
Share:
Hong Kong has been roiled by more than four months of anti-government protests sparked by a now-withdrawn extradition bill.
Messages were previously circulated online, calling for people to march from Tsim Sha Tsui to Sham Shui Po or the West Kowloon high-speed railway terminus on Saturday.
ADVERTISING
inRead invented by Teads
The calls prompted the MTR Corp to implement special measures at West Kowloon, closing some entrances and requiring visitors to prove they had tickets before being allowed to enter.
But it was only the march to Sham Shui Po that took place.
Marchers gathered at the Clock Tower in Tsim Sha Tsui at 3pm for the unauthorised demonstration. Some of them carried American and British flags to urge the countries to stand with Hong Kong.
Minutes after the march began, protesters left the pavement and walked on Salisbury Road and Nathan Road, forcing vehicles to stop on the busy carriageways. 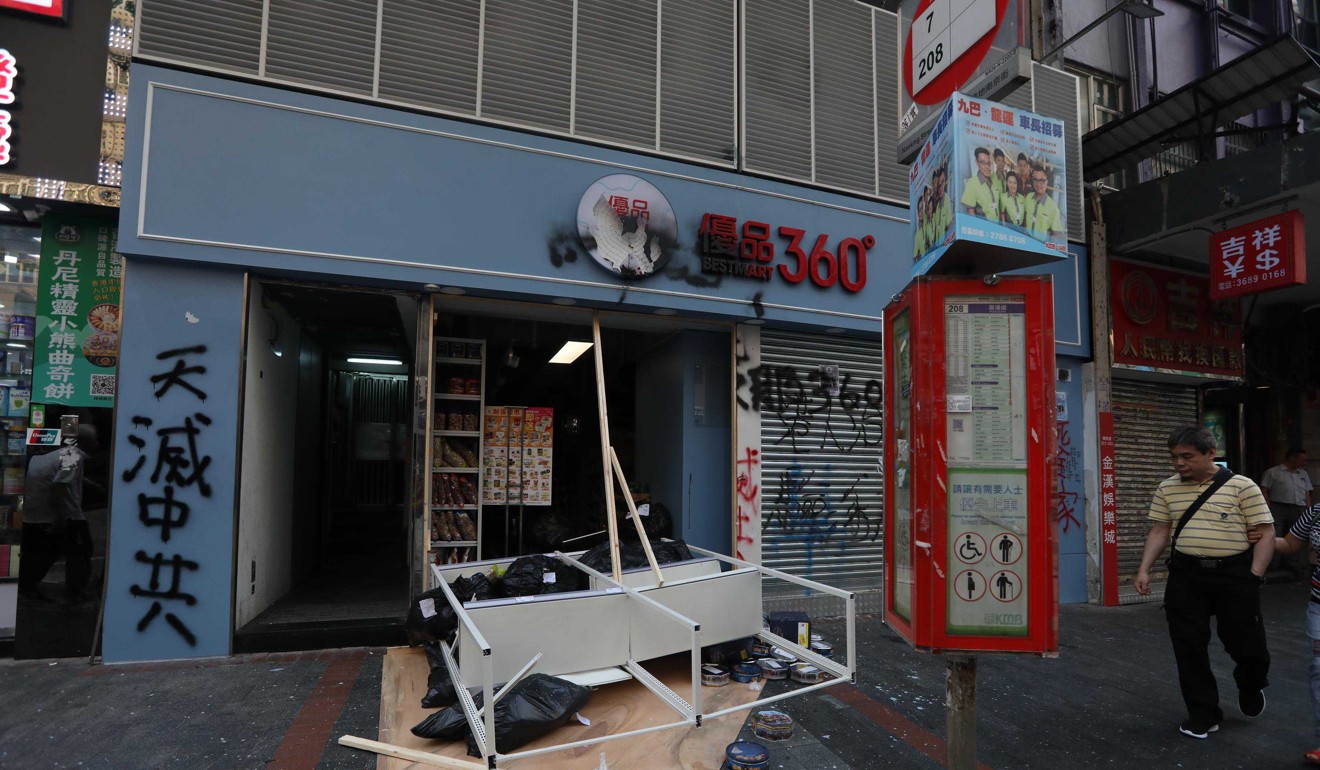 A Best Mart 360 store was vandalised in Yau Ma Tei. Photo: Xiaomei Chen
Share:
They also set up roadblocks at the junction of Haiphong Road and Nathan Road, disrupting traffic and causing confusion for passengers waiting at bus stops.
A 12-year-old girl, her face covered by a mask from the movie V for Vendetta, said fewer people joined the protests on Saturday as police had stepped up their efforts.
“I want to tell the government that even though they have the anti-mask law, we still have the rights to wear a mask,” she said. 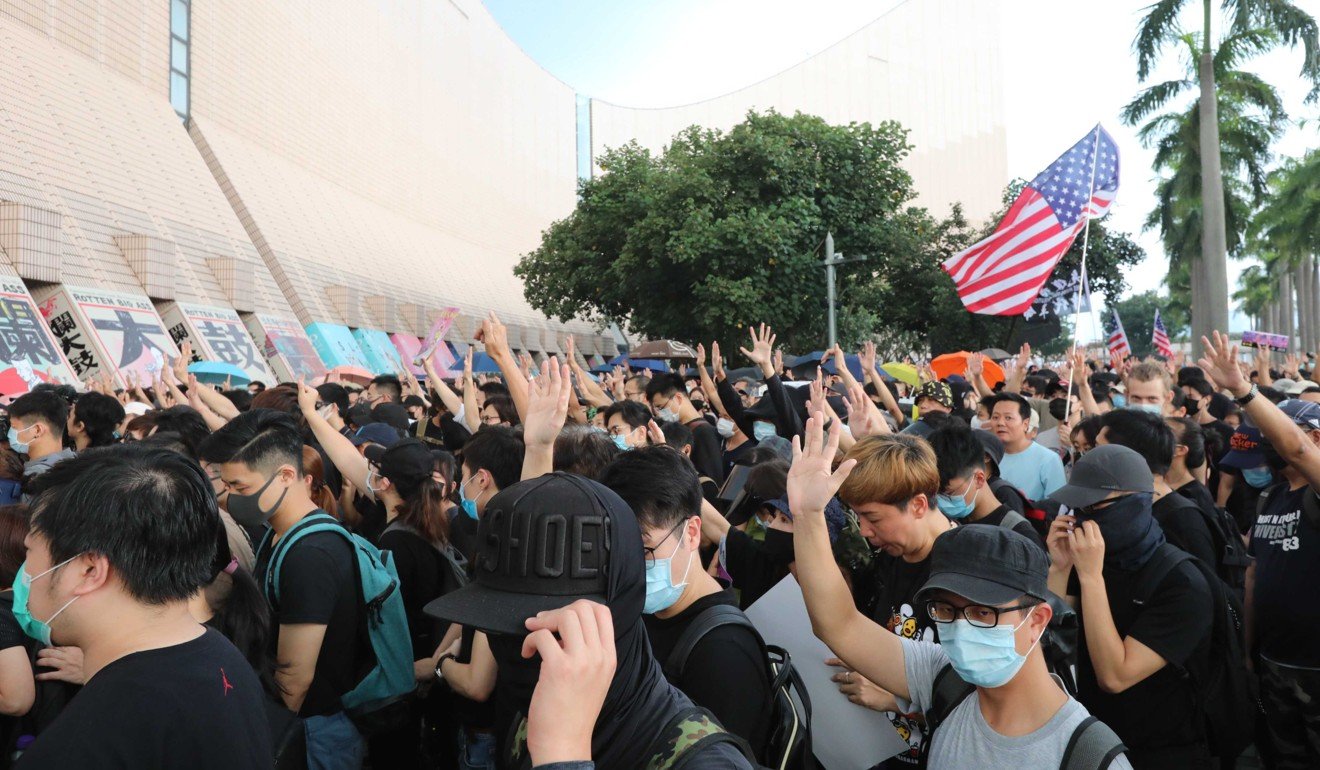 Protesters gather in Tsim Sha Tsui ahead of their march to Sham Shui Po. Photo: SCMP
Share:
A 25-year-old protester named Son carried an American flag in Tsim Sha Tsui. He disagreed with Trump’s assessment that the movement had de-escalated and suspected the US leader did not know the real situation in the city.
“He’s been in talks with the Chinese, who obviously would suppress news they don’t agree with and not tell him the truth,” he said.
But others agreed with Trump. Secondary school pupil Harry Lai, 17, said fewer people had joined recent protests because the new school term had started. “But we still have passionate peers … When people are free, they will still come out,” he said.
Protesters said apart from the ban on masks, they were also concerned about a Chinese University student’s recent claim she was sexually assaulted by a policeman after being arrested on August 31, as well as what they described as the “mysterious” death of a 15-year-old girl who had been reported missing but whose body was revealed on Friday to have been found in the sea in September. 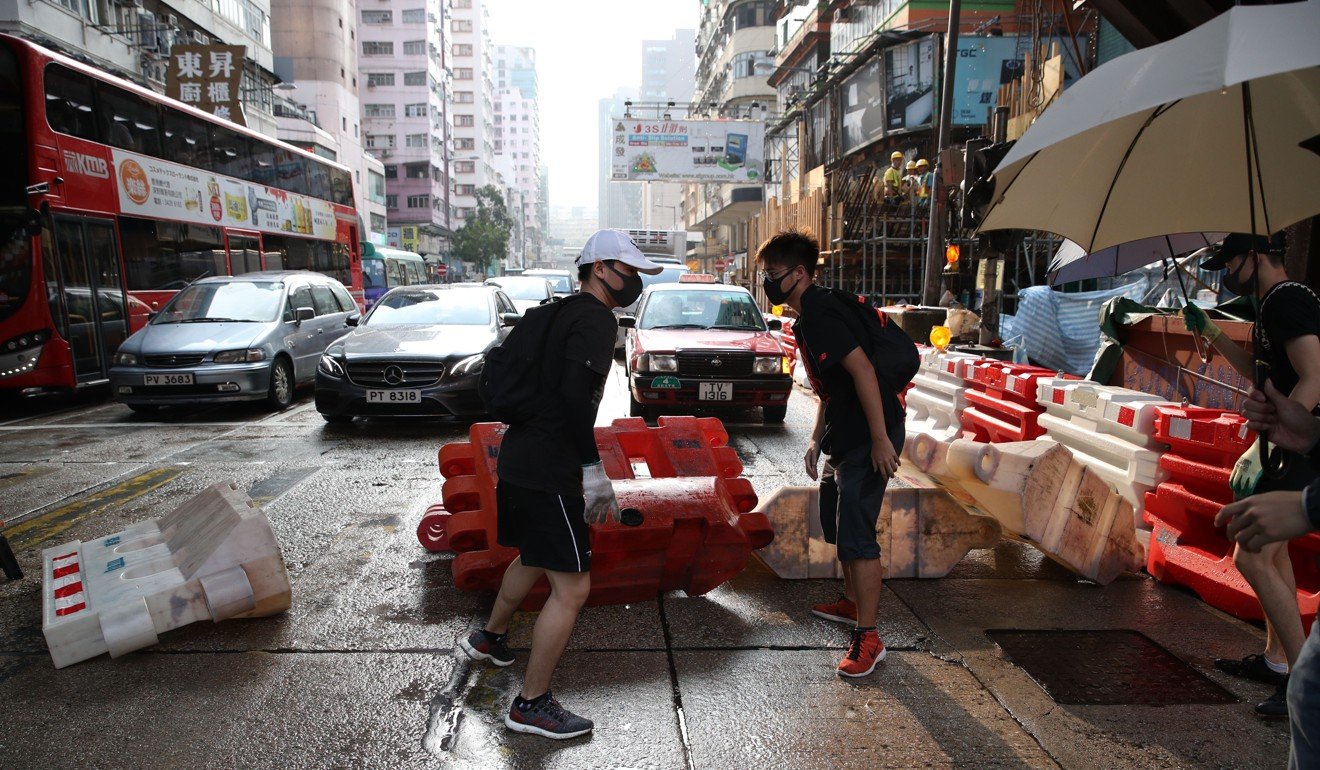 Protesters set up roadblocks on Nathan Road. Photo: Winson Wong
Share:
Addressing online rumours the teenager and others could have been killed by police, acting chief superintendent Kelvin Kong Wing-cheung said on Friday that an investigation, including an autopsy, found nothing suspicious about her death.
There was no protest in Kowloon Tong, but at about 3pm, two petrol bombs appeared to have been thrown at the MTR station, seriously damaging facilities. No one was injured.
Police said in a government statement, warning “rioters” to stop all illegal activities.
Posted by thebimini at 6:14 PM