BY SU BACON
Special to The Star 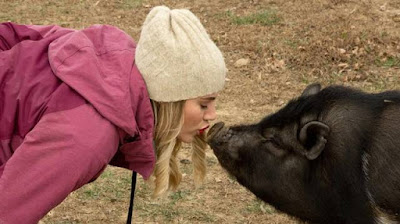 Ziggy is a well-loved rescue pet. He has his own bedroom, his own general store and his own blog with a following.
Three years ago, Ziggy’s future was uncertain. He was given up for adoption when he was 8 months old and weighed 40 pounds.
Ziggy was well on his way to becoming the 165-pound Vietnamese pot-bellied pig he is now when his owners realized they didn’t have a little pet on their hands.
ADVERTISING
inRead invented by Teads
“His owners were moving and said they couldn’t keep him,” said Angie Deras, 49, of Kearney, who saw Ziggy advertised on Facebook.

Teresa Kearney, who runs a foster home for pigs from the Kansas City Pig Rescue Network, gave Hazel a hug on her farm in Cleveland, Mo. SUSAN PFANNMULLER Special to The Star
1 of 22