In the Ia Drang Battle

In his memoir It Doesn't Take a Hero, General Schwarzkopf recounted, while a major, he accompanied the ARVN Airborne Brigade - which would be upgraded to a division in December 1965 - in an operation in the Ia Drang valley at the end of 1965. Following is his account:

General Schwarzkopf was mesmerized by LTC Truong's ability to sense the enemy's positions, while he did not see a damn thing. Each time Truong gave him order to fire artillery into the jungles, it was with pinpoint accuracy. Furthermore, he could not figure out why was it possible for Truong to anticipate the enemy troops' withdrawal paths, then to block them at two ends in order to box them in against the Ia Drang River. Major Schwarzkopf of the year 1965 and even General Schwarzkopf of nowadays - he published his memoir in 2002 - assumed with naïveté that Simply by visualizing the terrain and drawing on his experience fighting the enemy for fifteen years, Truong showed an uncanny ability to predict what they were going to do.

If in fact LTC Truong, upon receiving order to bring his troops from Saigon to the Highlands in search of enemy troops on their withdrawal to Kampuchea, selected on his own the landing zones amidst the vast jungles of Chu Pong massif, sniffed out on his own the enemy troops on the move, anticipated on his own the enemy's withdrawal paths and set up accurate ambush sites, the ways Major Schwarzkopf depicted, then Truong was indeed an exceptional commander with a uncanny and unmatched sixth sense. However, the reality was not as such.

General Schwarzkopf was naïve in thinking that LTC Truong acted on his own when he lead the Vietnamese airborne battalions in the Than Phong 7 Operation(*). In reality, he merely executed orders issued from II Corps General Staff from the outset through the conclusion of this operation. It is unthinkable that LTC Truong could have possessed the superhuman ability to sensing the enemy troops on the move under the cover of the dense canopies in the vast Chu Pong massif areas.

Let's unveil the mystery curtain of the magic show that mesmerized General Schwarzkopf in the Ia Drang valley in 1965, by filling the gaps in his account that is a product of nebulous memory with precise details on dates, coordinates and numbers provided by the II Corps Chief of Staff in his after action report Why Pleime. 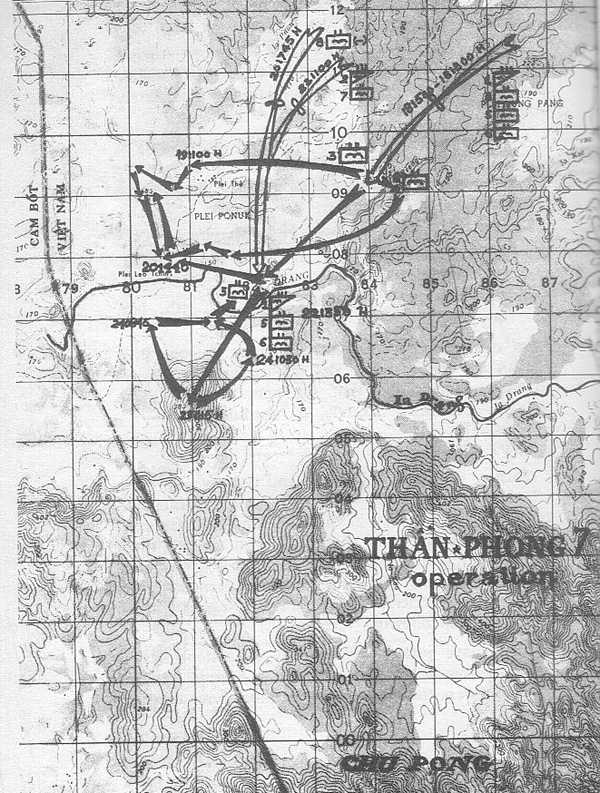 On November 17, 1965, II Corps Command analyzed intelligence and estimated that nearly 2/3 of enemy's strength had been wiped out through battles at Pleime and Chu Pong lasting from October 29 to November 11. II Corps Command had also requested the US Army to have B-52 airplanes systematically bomb the Chu Pong massif from West to East from November 15 to 19, shutting off the back door to Cambodia, leaving open only a narrow escape corridor at the valley of Ia Drang for the two remnant 635th and 334th NVA Battalions of 32nd NVA Regiment. Meanwhile, II Corps Command kept on inserting teams of Special Forces Rangers deep into enemy troops' territories to monitor their movements. These Special Forces Rangers teams acted as LTC Truong's eyes and ears. 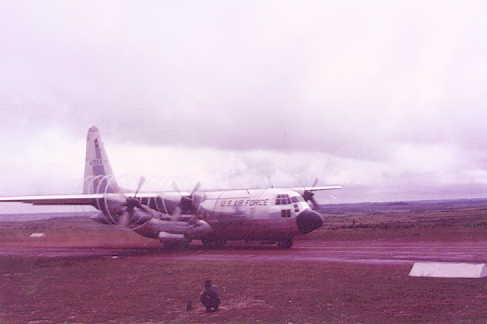 the Airborne 1st Task Force Headquarters with its three Airborne 3rd, 5th and 6th Battalions, and the Airborne 2nd Task Force Headquarters with its two Airborne 7th and 8th Battalions, spread out in Saigon, Bien Hoa, Vung Tau and Phu Yen into Pleiku. At II Corps Headquarters, Colonel Hieu briefed the designed plan of Than Phong 7 Operation(*) to LTC Truong, pointed out to him the unique escape route the Viet Cong would used to sneak back to Cambodia and presented to him a tactical map drawn up by G3/II Corps - the map with the borderline at odds with the one carried by Major Schwarzkopf from Saigon. Colonel Hieu also advised LTC Truong that the operation would be supported by artillery from US 1st Air Cavalry set up at LZ Columbus and LZ Crooks nearby, the first about 11 kilometers southeast and the second about 7 kilometers northwest of his operational area.

On November 18, from 3:00 p.m. to 6:00 p.m., Airborne 1st Task Force Headquarters and its three Airborne 3rd, 5th and 6th Battalions were helilifted to landing zone (X84, Y09) on the northern part of Ia Drang River. Airborne 3rd Battalion and Airborne 6th Battalion immediately set out to sweep for the enemy westward in two different axes. While on the move, Airborne 3rd Battalion was tipped off by Special Forces Rangers teams that a battalion sized enemy forces belonging to NVA 32nd Regiment were shadowing it.

On November 20, at 2:40 p.m., the enemy troops entered the very center of the ambush and was caught within the field of fire of Airborne 6th Battalion. The enemy suffered about 200 casualties in this engagement. Furthermore, in their sweep, Airborne 3rd Battalion and Airborne 6th Battalion had destroyed 3 training centers, one equipment cache and 75 houses.

On November 20, at 5:45 p.m., Airborne 8th Battalion was helilifted to location (X82, Y07), to prepare for the insertion of Airborne 2nd Task Force Headquarters along with Airborne 7th Battalion at 11:00 a.m. on November 22. 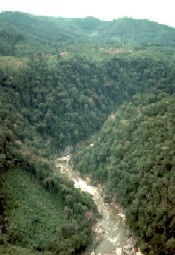 The units already present on the battlefields - Airborne 1st Task Force Headquarters, Airborne 3th Battalion, Airborne 5th Battalion, and Airborne 6th Battalion converged toward location (X82, Y07); by 1:50 p.m. on November 22, all units were reunited at this staging area. From here, the entire Airborne Brigade crossed to the south side of Ia Drang River and climbed up a mountain and reached its peak at (X81, Y06) around 11:15 a.m. on November 23. They settled down for the night in preparation to ambush the enemy troops at the corridor that II Corps Command had predicted the enemy would utilize to withdraw back to Cambodia the next day. On their journey up the mountain, each time enemy positions were tipped off by Special Forces Rangers teams, LTC Truong gave order to Major Schwarzkopf to call in artillery fire on the enemy troops hiding ahead of his advance.

Grant that General Schwarzkopf was present at Than Phong 7 Operation. Nevertheless, his participation was still of an outsider. He only saw the actions happening on the stage, but was unaware of all that was going on behind the scenes. Although he was, and still is, a military man, he seems not able to differentiate between the two aspects of control and command of a military operation: LTC Truong was in command of the operation, but he was remotely controlled by II Corps Command. Furthermore, he was unaware of active participation of the ARVN Special Forces Rangers in the operation. They operated in top secret missions and their activities were rarely mentioned in official military documents - American and Vietnamese alike. As a matter of fact, one has to rely on a Việt Cộng's document to come to know about the stealthy role of ARVN Special Forces Rangers in the battle of Pleime-ChuProng-IaDrang.

Posted by thebimini at 1:15 PM