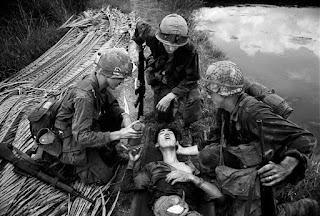 This picture was taken by my father, Philip Jones Griffiths, in Vietnam in 1968 during the battle for Saigon. This is not a normal “war” photograph. It is not often you see “enemies” cradling each other. However, the American GIs often showed compassion toward the Viet Cong. This sprang from a soldierly admiration for their dedication and bravery — qualities difficult to discern in the average government soldier.

This particular Viet Cong had fought for three days with his intestines in a cooking bowl strapped onto his stomach. Francis Ford Coppola was so inspired by this image that he included a scene in his 1979 film Apocalypse Now with the famous line, “Any man brave enough to fight with his guts strapped on him can drink from my canteen any day.”

Posted by thebimini at 7:36 PM