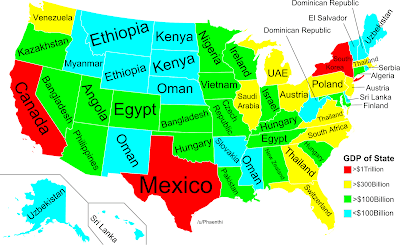 Redditor Phaenthi uploaded a map that shows which countries in the world American states’ GDP overtakes.

What you see is that the U.S. generates more money a year than much of the world put together, but it also reveals some mind blowing stats.

The state of Texas’ GDP in 2012 was $1.4 trillion, greater than Mexico’s $1.18 trillion, despite the fact that Mexico has more than four times the population of Texas.

California’s GDP in 2012 was $2 trillion, far exceeding the entire country of Canada’s haul of $1.82 trillion. It’s widely known that California alone is also one of the largest economies in the world.

Almost surprisingly, Illinois beat the oil-rich country of Saudi Arabia, though unsurprisingly, Chicago is also one of the richest cities in the world, raking in $524 billion, according to Technosio.

Of course, without an adjusted cost of living or the median household income, this map only shows the financial generation of each state and not how individuals in the states actually live.