The vast majority of the locales are due west (across the Song Hre River) of Gia Vuc and somewhat south. It's interesting that Riesen made the sketch map most likely based on existing French maps trying to translate into French what he thought he understood the Montagnards to be saying. I don't think that the Montagnards had any written language (that I'm aware of), and their sense of distance would have been rather unsophisticated, i.e. not able to judge distances in other than "a short or long walk."
Beginning at the bottom of the sketch map working up (south to north) 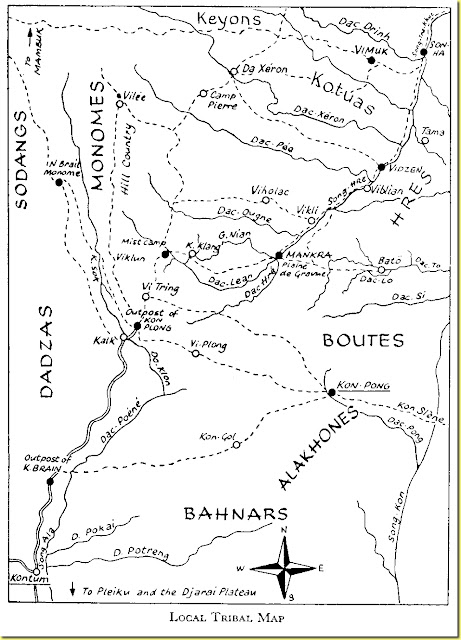 1. Located the Dac Poe'ne' River. My map did not go far enough south to cover Kontum.
2. On the sketch map north of Dac Poe'ne' is another waterway, "K sat." This is most likely the Dak Xa Rack River. It's orientation on the sketch map is generally correct.


6. North of Vi Tring is the hamlet of K. klang and the "Mist Camp." The terrain is very rugged in this area and I assume the camp drew its name from being suspended in clouds and mist most of the time. The topo map has a Kon Klang north of Vi Tring but no ref to the Mist Camp. I assume the camp was close to Kon Klang. This general area is or was most likely in heavy multi layered canopy.


11. Camp Pierre is actually on the top map. It is 8 KM north and 9 KM west of Gia Vuc and in a heavily canopied area.
12. the Dac Pe'e and Dac Xe'ron streams / rivers are oriented NW to SE on the sketch map, but actually more N and S on the topo (Dac Pe'e was not noted on the topo).


13. Continuing NE along the Song Hre on the sketch map, Tama is on the topo, and on my original 1:50,000 scale map (I don't have it at my current locale presently) there was an unimproved airstrip noted.
14. The NE corner of the sketch map is way out of proportion. On the actual topo Vimuk is some 30 KM north of Camp Pierre and slightly west. The DaK Drinh is correctly oriented on the sketch map but as noted a lot further north than depicted on the sketch. The old district capitol of Son Ha is correctly oriented along the Song Tra Khuc River (The Dak Drinh and Song Hre rivers converge and become the Song Tra Khuc)
15. In the upper left corner of the sketch is an arrow pointing N to Mambuk. It's actually Mang Buk. It is correctly oriented in terms of being a fair distance west of Gia Vuc but is not as far north as depicted on the actual topo. It's actually only slightly north of Gia Vuc.
So Rene Riesen operated mostly in the area immediately west and south of Gia Vuc in the 1950 / '51 time frame.