THE MY CANH RESTAURANT BOMBING 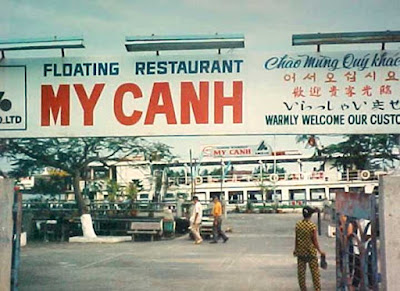 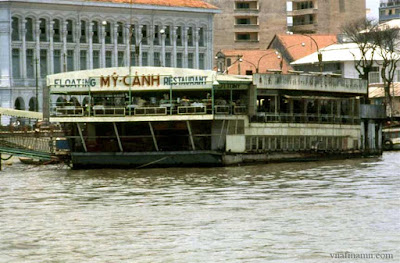 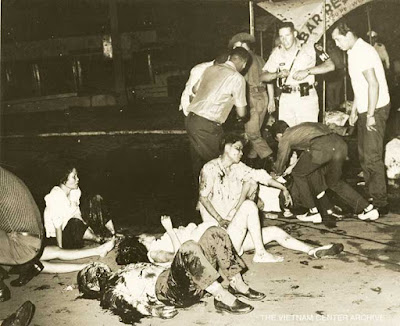 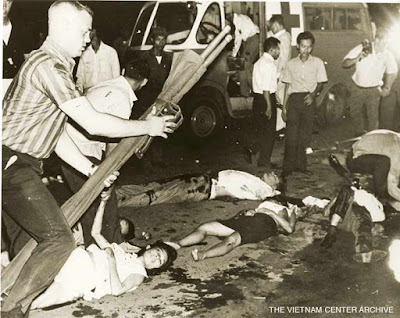 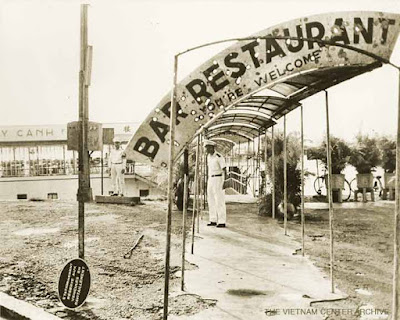 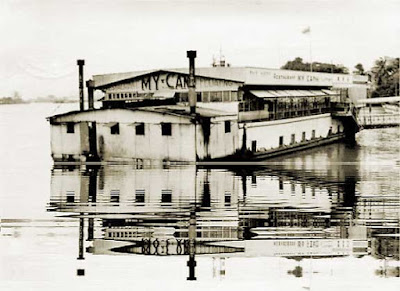 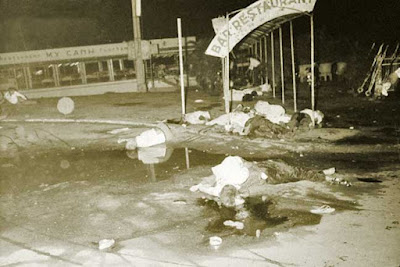 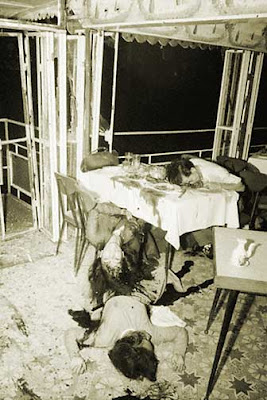 Terrorist bombs shattered a floating restaurant on the Saigon river here tonight and killed at least 29 persons, including eight Americans.

Two big explosions sounded almost simultaneously from the river bank. Witnesses said they believed that as many as 50 persons may have died in the crowded restaurant, the My Canh, and on the riverside boulevard nearby.

Police said that 17 of the dead were Caucasians, and presumably most of these were Americans. Of six Viet Namese dead in the initial count, most were women. A United States military spokesman said the dead included five U.S. servicemen and three American Civilians. He said 30 persons injured were targeted at American installations. One hundred or more persons were wounded...

The explosions at the My Canh occurred at 8:15 p.m. (7:15 a.m. St Louis time). One was caused by a powerful shaped charge - possibly an American-made Claymore electric mine - planted in the bank of the river. The Claymore explodes in the direction it is pointed.

The restaurant which is moored about 25 feet from the bank, has an entry over a gang-plank leading from the waterfront street. It is patronized mostly by Americans and wealthy Vietnamese.

A second blast, which investigators believed was caused by a bomb mounted on a bicycle went off at a tobacco stall on the bank next to the restaurant. Investigators assumed that the explosions were placed in advance and timed to explode at the peak of the dinner hour on a weekend night. The restaurant was crowded and its glass walls were crushed under the haul of fragments. Victims were carried to a number of Saigon hospitals and authorities had difficulty in compiling casualty lists.

The riverfront normally is thronged with strollers seeking cool breezes in the early part of the night. Women walking with the children were among the casualties. At least one American woman was believed to have been killed. The dead and wounded were scattered in a wide arc...

In sheer power the blasts were exceeded by several others, including the bombing last Christmas eve of an officers hotel and the bombing in March of the United States Embassy. Although Viet Namese police patrol the Saigon waterfront, the My Canh restaurant has not been regarded as a likely prime terrorist target. There were no American military police near the establishment when the blasts occurred. The scene is about 500 yards from the U.S. Embassy, which is heavily guarded since it was damaged March 30 by a terrorist bomb that killed 30 persons.