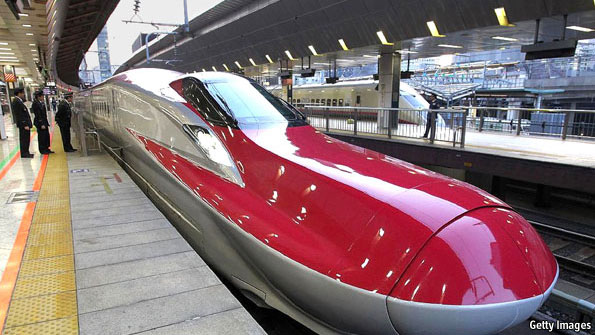 Fast, reliable and expensive
THE world's busiest train route, and one of the busiest air routes, is between Tokyo and Osaka, Japan's two biggest metropolitan areas. On that corridor, the shinkansen, as Japan's bullet trains are known, were born in 1964. They whizz 120,000 passengers a day smoothly from one place to another, on trains that leave every ten minutes. Although humans, not robots, are at the controls, the average delay is a miraculous 36 seconds. To take all those passengers by air would require 667 aircraft, each with 180 seats, or five times Japan's fleet of Boeing 737s, estimates Macquarie, an investment bank.
Undeterred, between March and August three low-cost airlines will have started operations in Japan. It would be a miracle if they could help hammer down train and plane fares in Japan, which are excruciating. For example, a one-way shinkansen ticket from Tokyo to Osaka costs ¥14,000 ($170), and there are no discounts for return fares or for booking early. But compared with Europe and other parts of Asia, where budget airlines have quickly gained market share, in Japan the low-cost model is expected to take time to take off.
In this section
Reprints
There are three main reasons for that, analysts say. First, all three newcomers have established parents. Peach, which started flying in March, and Air Asia Japan, which starts in August, are part-owned by ANA, one of Japan's two main carriers. Jetstar Japan, which launches operations in July, is one-third owned by Japan Airlines (JAL). Such ties have usually hobbled low-cost airlines elsewhere: incumbents hate to cannibalise their own business. (Australia, where Qantas owns Jetstar, is an exception.) Analysts say the upstarts will thrive only if ANA and JAL step out of their way, letting them shake up the domestic tourist market. The big boys could then concentrate on long-haul and business travel.
Second, the budget airlines may struggle to make similar profits to their lucrative low-cost counterparts in other countries because, despite deregulation, airport costs and fuel taxes in Japan remain among the highest in the world. That could limit expansion, though Jetstar Japan is boldly aiming for 100 aircraft by the end of the decade, up from three at its launch.
Third, it will be hard to convince finicky Japanese passengers that low fares make up for the lack of comfort and convenience they are used to. Jetstar and Air Asia are using Narita airport as their hub, which is expensive and time-consuming to get to from Tokyo. The main carriers use Haneda, which is closer to the capital and cheaper. The shinkansen zoom out of the city centre, with no reservations needed.
Miyuki Suzuki, the boss of Jetstar Japan, says her company's strategy is to use low fares to persuade people to make trips they would otherwise not have made at all. More tourists, she hopes, will start visiting Japan's most far-flung islands. She says she will not go head-to-head with the shinkansen (though her airline will fly between Tokyo and Osaka). Peach and Air Asia Japan have their sights not only on domestic flights but also on the route between Tokyo and Seoul, the nearest foreign capital. They may be eyeing the East Asian market, where low-cost penetration lags behind the rest of Asia.
Alas, none of Japan's new budget carriers is expected to be as cut-throat as low-cost carriers elsewhere. Ms Suzuki says Jetstar Japan will allow its passengers to book through travel agents, which are still ubiquitous, as well as online. “This is Japan,” she says, with a sympathetic air unusual for a budget-airline boss. “It's not all going to be self-service.”
Posted by thebimini at 11:28 AM